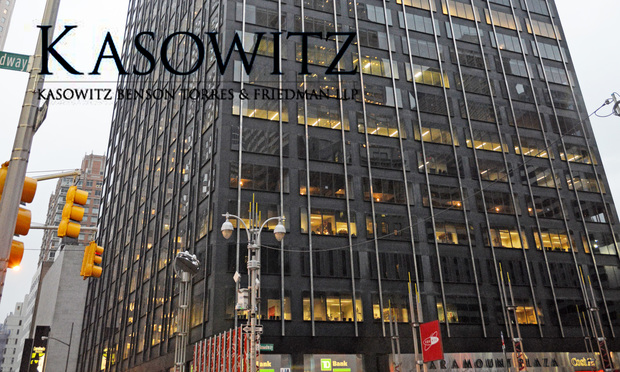 Paralegals watch clients make dumb decisions about representation all the time, but it’s more disconcerting than usual when it’s the president of the United States.

Many probably got just that feeling when they heard that President Trump had selected New York attorney and long-time associate Marc Kasowitz as outside counsel to represent him in the upcoming special counsel investigation into possible collusion between the Trump campaign and Russia during the 2016 presidential election.

Kasowitz and his firm, Kasowitz Benson Torres, have served Trump for more than 15 years in both personal and business matters and may seem like a natural choice for a president who seems to prefer advisers he can trust over those who might instead be competent and professional.

The firm has already contributed a number of lawyers to the administration, including the new ambassador to Israel, David Friedman. And Edward McNally, a current partner, is said to be on the short list for the U.S. Attorney for the Southern District of Manhattan position.

How Much Does Your Attorney Matter in a Special Investigation?

Even in Washington D.C., there are not a lot of people with experience in shepherding special investigations of presidents. But there are lawyers who are far more familiar with the agencies and processes involved than Marc Kasowitz, leading some media outlets to speculate that he will serve mostly as a figurehead and bring in more specialized lawyers.

Still, paralegals also know that it matters who is at the helm. The lead attorney sets the tone and makes the big decisions. The question for Trump is, will Kasowitz make the right ones?

A courtroom is no place for incompetents, and either is a House impeachment trial, which is where the collusion matter could potentially lead. And Kasowitz’s track record is decidedly mixed. Although he has successfully represented big names like AMC Networks, the Port Authority of New York and New Jersey, and TPG, he also has lost big when representing Trump and Trump properties. Most recently, and most notably, was the Trump University lawsuit, which he was forced to settle to the tune of $25 million, not to mention a 2006 libel case against a journalist who wrote a book about Trump.

More recently, Kasowitz’s threats of a lawsuit against the New York Times for publishing allegations of sexual misconduct were shown to be a bluff when the paper refused to issue a retraction.

Although Kasowitz is feared and respected as a trial attorney, he appears to have little or no experience dealing with national security or intelligence work, and strikes many attorneys more familiar with the special counsel process as an unusual choice.

Nor is he perceived as a specialist in criminal defense… an area of the law that certainly represents the worst-case scenario of where this investigation could end up. Prosecutors generally – and a special prosecutor with the status of former FBI director Bob Mueller in particular – do not react well to aggressive bluffing… a lesson that Kasowitz might learn at a very expensive moment for President Trump.

When Counsel is More Distraction Than Assistance

Kasowitz brings his own liabilities to the table in the form of several wealthy Russian clients with ties to the Kremlin whose interests, perhaps, coincide with Trump’s own interests. While this doesn’t create any conflicts for Kasowitz—quite the contrary—it inevitably raises the specter of his possible use of privileged attorney-client communication to extend the very collusion that Trump is attempting to defend himself against.

In terms of overall strategy, selecting Kasowitz likely torpedoed the rumored selection of former Senator Joe Lieberman as FBI director to replace the fired James Comey. Lieberman currently works as an attorney at Kasowitz’s firm, leading to clear conflicts of interest were he to be named to head the lead investigative agency on the collusion case.

Is Kasowitz Secretly a Genius Pick?

Every paralegal has seen clients who won’t get out of their own way. Although many professionals and pundits had recommended that Trump retain private counsel for the collusion investigation (the White House Counsel represents the office of the presidency, rather than the current occupant individually), Kasowitz was certainly not what they had in mind.

The type of behind-the-scenes troubleshooting that Kasowitz has reportedly done for Trump in the past is probably not good preparation for dealing with a special counsel’s investigation of the president.

On the other hand, Kasowitz has a reputation for being tenacious and quick-thinking, skills that could allow him to adapt on the fly to deal with the new environment of Washington D.C.

Trump is known for picking loyalty over expertise, but it’s less clear that this has served him very well. The president’s insistence on bringing in loyalists, despite warnings from experienced professionals, has been the very thing that has sparked many of the current scandals plaguing his administration.

With the twists and turns that have come almost weekly from within the administration, the reality may be that there is no universally appropriate pick for outside counsel in this case.

What is currently developing as an investigation into collusion with foreign governments to manipulate a presidential election could easily pivot into a case of financial wrongdoing or even darker crimes. This is something both Bill and Hillary Clinton could attest to, as the investigation into their real estate dealings eventually lead to Monica Lewinsky… and similarly, the Benghazi hearings lead to Hillary’s email server.

But there’s another possibility, which is that all the outside punditry doesn’t fully understand the criteria for the selection. Perhaps with a more accurate perspective on the underlying fire creating all this smoke, Trump has picked exactly the right sort of attorney to defend him against whatever allegations may eventually be unearthed.

Based on what we know of Kasowitz, this is disturbing news both for Trump and for the country. The history of his defense of Trump has revolved around fraud, allegations of sexual misconduct, and shady business dealings.

If those are the sorts of issues that are waiting at the other end of the special counsel’s investigation, it will be a bumpy ride for both Trump and the country… and perhaps a good thing for him that a fiery litigator like Marc Kasowtiz is on his side.